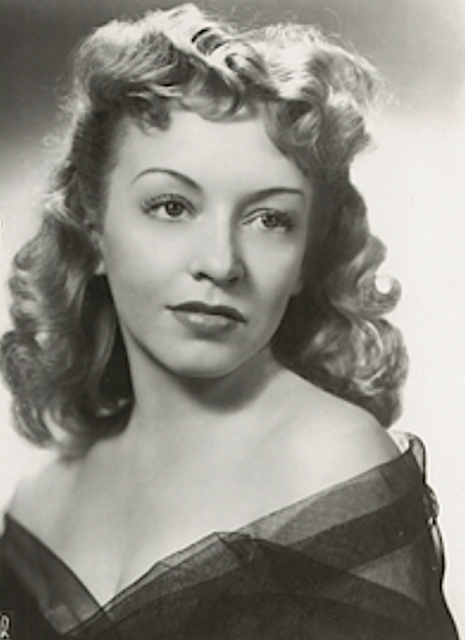 She only recorded two albums. She may or may not have died in a car accident. Her year of birth is up for grabs. Who is Helen Carr?

It's a mystery, or at least a mystery in terms of digging up information about her on the Internet. She was born in Utah in 1924, or perhaps 1922, and once her career took off, she fronted for a number of big bands, including Stan Kenton and Charlie Barnett. Her voice is breathy and distinctive, and while some liken her to Billie Holiday, I think a sharp-toned Blossom Dearie is a much closer match if we're going for comparisons.

Yet why compare? She has her own sound, one that never quite comes at you directly, but sneaks up on you sideways and around corners. Her first - or was it her second? - LP, 1955's "Down In The Depths Of The 90th Floor" is also noteworthy because her set, including "Tulip or Turnip" and "I Don't Want To Cry Anymore" haven't all been done to death. Everything about it feels fresh. 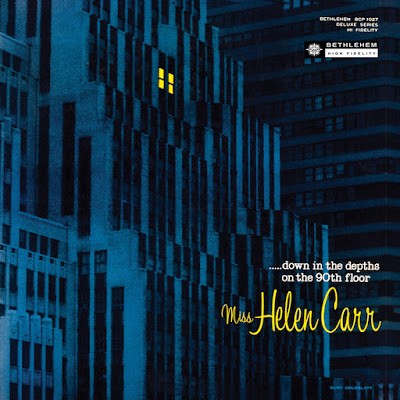 Adding to the mystery of Helen is the fact that she never reveals her face on her LP covers, including 1955's (or 1956's?) "Why Do I Love You" - a Cheerfully Heavenly Helen Exclusive! - which features two models (I'm assuming) making out on the beach. This version's been remastered, yet what makes it truly stand out, again, are the off-the-beaten-track song selections and Helen's gorgeous vocals, which can turn hot or cool on a dime.

Helen died in 1960, either in a car accident or due to breast cancer, leaving behind her husband, pianist/arranger Donn Trenner (who's still kinkin' at age 90). They even wrote a song together, "Memory Of The Rain," which is featured on "90th Floor." Treasure these two LPs, because that's all there is.*

(*Actually, that's not true. See below.) 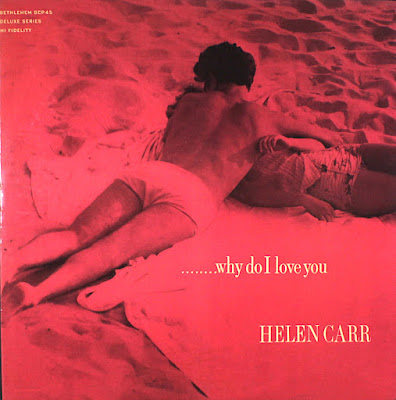 In the comment section of this post, Michael, who's a better music detective than I am, correctly points out that Helen has two tracks on the 1957 LP "Max Bennett Plays." Now we have more Helen tracks to listen to, plus a terrific jazz album to boot. Hooray! Thanks, Michael. 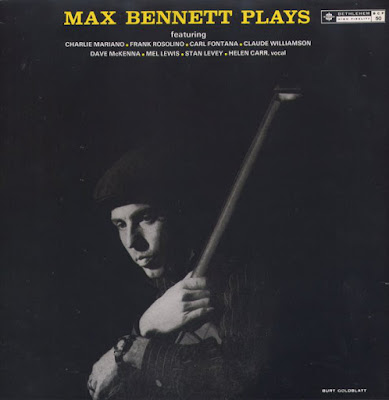 But wait, there's more. Though I never intended this post to be a constantly revised all-Helen collection (I thought her two LPs were all there was) (shows what I know), it's turning out to be, this time thanks to commenter Max80, who helpfully pointed out that she has a track, "Say It Isn't So," on Charles Mingus' "West Coast Recordings." Helen + Mingus. What's not to love? Thanks, Max80! 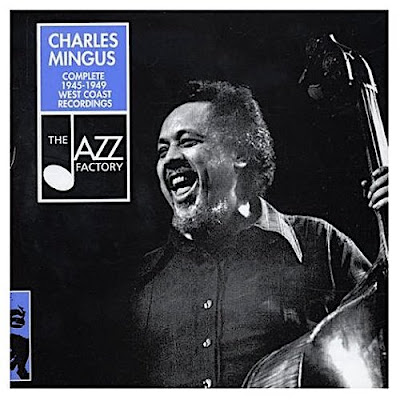 Meanwhile: "I serve Corn Flakes on the rocks!" Who else but Fang's Wife would have said that? 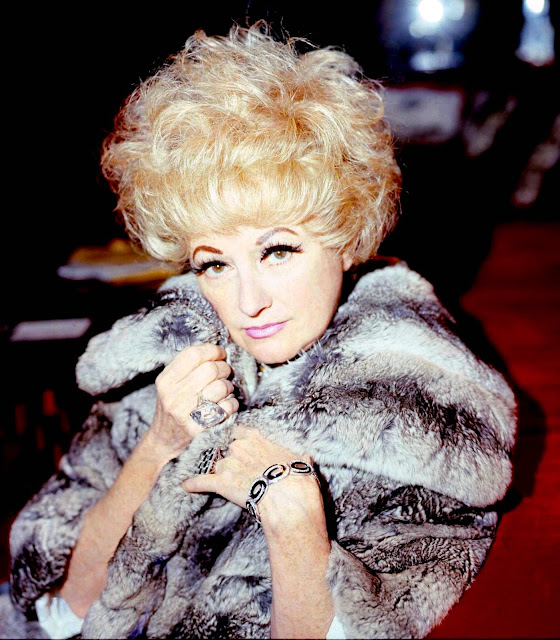 The Mother Of Modern Female Comics (uncharacteristically glammed out above) had to look like a kook back in the day - with wild outfits and even wilder, proto-punk hair - in order to be accepted by audiences, since no "normal lady" would dare be a raucous stand-up comic. In fact, at the time she started, there wasn't a single female comic on the circuit. Her mentor Bob Hope called her look "a Warhol mobile of spare parts picked up along the freeway." 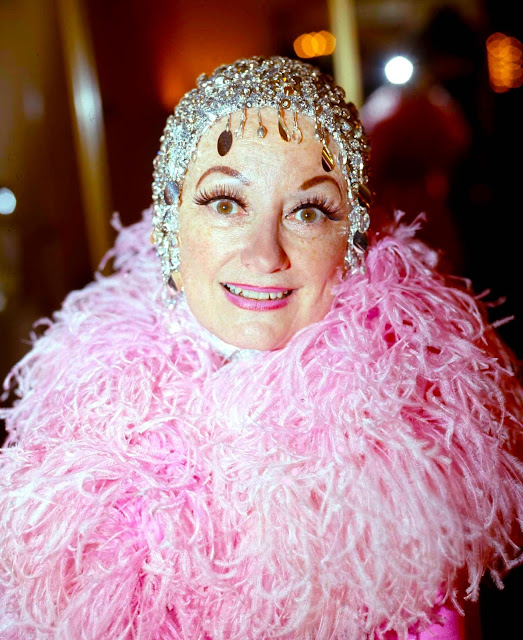 Her 1959 comic LP, "Wet Toe In A Hot Socket" - a Killer Diller Cheerful Exclusive! - was her very first and it's a delightful giggle-fest, as you'd expect, and with an audience that sounds positively soused (their laughter sputters and dribbles from their mouths). Recorded at the teensy Bon Soir nightclub in Greenwich Village, Phyllis shared her dressing room with a certain buttery-voiced singer: 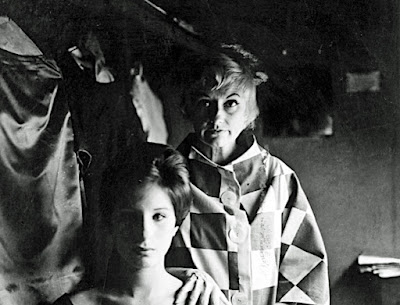 Yes, it's true, a then unknown Barbra Streisand was her opening act. In other words, it was a pre-Stonewall, gay gentleman's double-bill dream show. 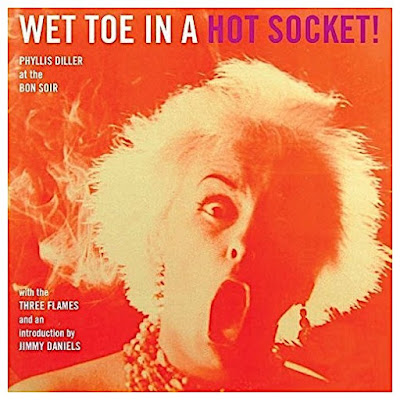 Time to shake it, don't you think? And who better to shake it than Miss Abbe Lane. 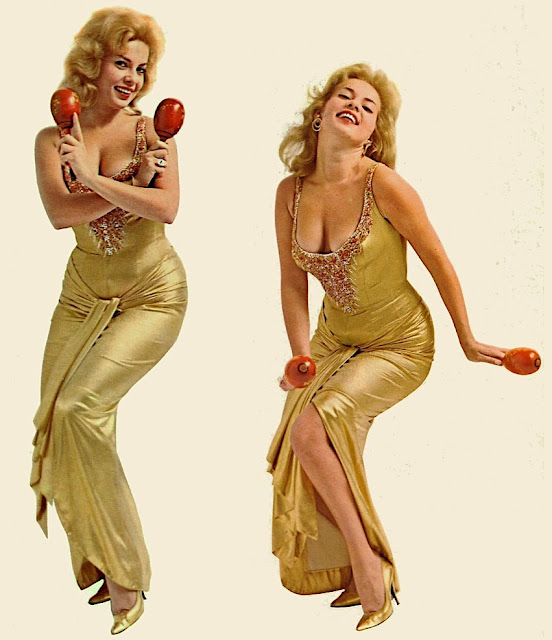 Abbe's on the first track of this fabulous Xavier Cugat LP, "The Brand New Cha Cha Cha" - a Cheerfully Cha-Cha Exclusivo! for you and yours - with songs like "Tremendo Cha Cha Cha" and "Oyeme Mama!" and "The Chi-Chi Cha Cha Cha" and more. First released as a four-track EP in 1956, it was restored in 2009, and with scads of new Cugat Cha Cha Cha tracks from the same period added on. Resistance is futile. 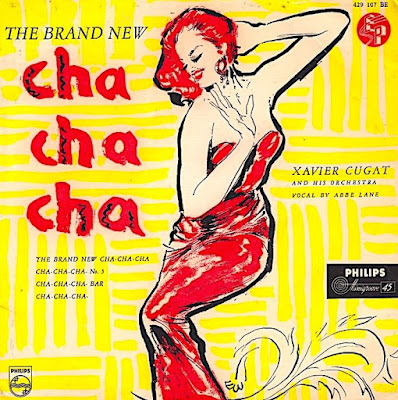 As you surely know, The Secret Song File was once crowned Miss Sausage Queen USA. Get your mind out of the gutter, it wasn't for that reason (yes it was). 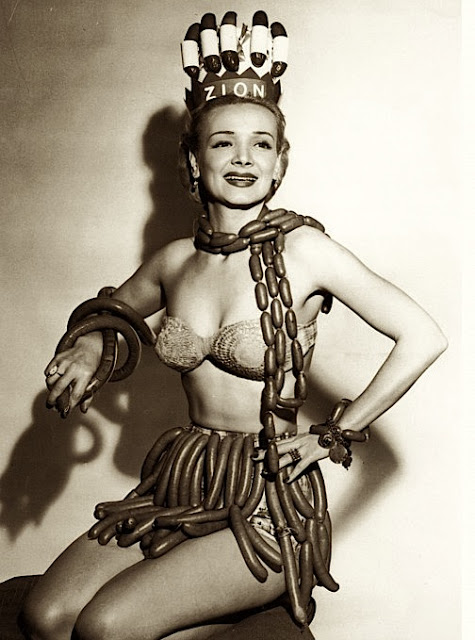 At any rate, her time as the Sausage Queen got her to thinking about how sausage is made, about body parts (just go with this), and how a certain late-80s/early-90s girl group singer had a moniker which made note of her left eye. And voila, she further noticed that this girl group has released a terrific new CD, minus the left eye singer, of course. She died years ago, dont'cha know, but not before taking care of her abusive ex-boyfriend. Girl definitely knew how to bring on the drama.

Get all dramastique in the comments, if you like!
Posted by The Cheerful Earfull! at Wednesday, July 05, 2017

Found Carr's cd at a local library years ago, then purchased it on line. Wished she had recorded more. Thanks for the post for others to discover.

I've looked for more of her - singles, one-offs, radio transcriptions, etc. - but those two LPs really are it. I wish she recorded more, too. :(

Helen Carr also sings on two tracks on the 1957 album "Max Bennett Plays". The songs are "Do You Know Why" and "They Say".

Thank you, Michael! I'll make note of that above.

The Cugat album is already down. Darn!

Geez, that was fast. Should be ok now.

Helen may not have appeared on the front covers of her albums, but her second album, "Why Do I Love You", has a photo of her seated on the floor on the back cover.

Also, I was wondering, what bonus tracks are on that version of "Why Do I Love You"?

You're right, there's no bonus tracks amongst the 12. I meant to say that it's been remastered, and I've corrected that above. Thanks for pointing that out!

No problem! There's a photo of the back cover of "Why Do I Love You" at:

It looks like there may be still another Helen Carr recording out there:

There's no mention of who's singing.

Those same credits are on
https://enciclopediadeljazz.wordpress.com/2015/02/26/curson-ted/

for the Ific/You Made Me Love You single. The Enciclopedia Del Jazz listing includes some other songs as well, but that may not be right. They may be confusing "Are you ready Teddy" with the unreleased "Are You Ready Freddy".

"You Made Me Love You" is on a couple of King Curtis compilations:
The 3 CD "The Complete Atco Singles" (from Real Gone Music):
https://www.amazon.com/Complete-Atco-Singles-King-Curtis/dp/B0167AL848

Thanks again, Max80!!
What a treasure trove of info!

I just found out there's a video clip of Helen performing "My Old Flame" with Charlie Barnet. It's on the DVD "The Big Bands, Vol. 2: The Snader Telescriptions"

There's some information about it at:
http://www.weirdwildrealm.com/f-charlie-barnet.html

"Ridin'High" from the Steve Hoffman Music Forums at:

has found yet another Helen Carr recording:

Helen Carr and ensemble sing "Gilly Gilly Wish Wash" with Chuck Foster and his orchestra on a 78 from 1947. I don't know if it's on any CDs.

I will never say that I've completely researched something again. Ever! ;)
On the other hand, maybe this is Helen's sly way of making sure we find everything.

Helen Carr, a veteran vocalist in
music circles who sang with Stan
Kenton and Charlie Barnett, cut “Love
Is A Serious Business” and “It’s
Beautiful”. Release date for both
records is slated for Nov. 15th

you can see the 45 here:
https://www.valueyourmusic.com/items/311729241334-helen-carr-mgm-promotional-photo-negative-4-records-down-in-the-depths

I just bought a copy of it. That's a total of 28 Helen Carr songs (counting the video clip).

I've found three more Helen Carr recordings:
There are two songs on CD from her time with Stan Kenton (which was one month in 1952):
"Everything Happens To Me" is on the CD "Stan's Singers"
"Don't Worry 'Bout Me" is on "Stan's Singers Volume 2"

They were performed on the Bob Snyder show on June 22, 1952:
http://allthingskenton.com/table_of_contents/radio_broadcasts/bob_snyder_show_2/

She also sings "No Baby, No" on the album "Chuck Foster: One More Time: The Big Bands", from the US Jazz re-issue label Blue Heaven Records (BH3-304) (Series 3 volume 4)

(Also, it seems there was another singer who used the name "Helen Carr". There's some information about her at: http://bbdb.us/c6.html under Hal Curtis Orchestra. The article says "Curtis led a predominantly "territory" band that traveled the Midwest. It is not presently known if they ever recorded." Helen's daughter says she sang with Hal Curtis from the mid-1940's to the mid-1950's)

The "Stan's Singers" CD sounds like a winner - and not just for Helen!

Found another Helen Carr title:
In the June 7, 1952 issue of Billboard , on page 37, there's mention of a recording of "Sittin' 'Neath The Willow Tree", which she sings with Paul Nero and his Orchestra. A copy of it sold on ebay a few years ago. There's a photo of it at:
http://rootsvinylguide.com/ebay_items/paul-nero-orchestra-sittin-neath-the-willow-tree-rhythm-records-1002-vg

Hopefully there are more copies out there somewhere.

Now--are you ready for this?
On the Steve Hoffman music forums, Ridin'High/Ivan Santiago has begun a huge posting of bio-discographical details about Helen.

Member Eric Carlson has also found lots of information, including, among other things, her maiden name-Huber.

You can read everything they've posted so far starting at:
http://forums.stevehoffman.tv/threads/obscure-neglected-female-singers-of-jazz-standards-1930s-to-1960s.588217/page-38

Fantastic resource on the music forum! Thanks, Max80!!

Been away *far* *too* *long*. You kids are posting up some amazing info.

Thanks for hosting this never-ending party. I'd stick around to help clean up, but, you know...gotta walk the dog.

Pretty sure that's Natalie Wood in the boat, not Abbe Lane.

D'oh! You're right and I've just replaced it. Thanks for pointing that out. :)

Hi! I just discovered your blog and the story about the mysterious Helen Carr. I downloaded the Max Bennett but unfortunately the links to the two albums by Helen have apparently expired. Could you please re-up? Thanks!

Maybe I can contribute something - I found a short interview of Donn Trenner in which he mentions "my first wife Helen" as a singer he had a special connection with - https://www.namm.org/library/oral-history/donn-trenner

I found this discussion thread that has LOTS of info on Helen, courtesy of readers who had done a lot of research including newspaper archives.From this research we learn her maiden name (Huber), the name of her first husband (Walter Carr), that she had a son from her first marriage, that she appears to have remained married to Donn Trenner until her death, and that she most likely was born in 1922. Also, Trenner wrote a memoir a few years ago, which certainly must contain information about Helen, but is probably also a very interesting read as he's worked with many prominent people throughout his career.

And I got all of this from only one page of the 68-page discussion! The thread is on the general subject of obscure female singers so this one may have most of the discussion about Helen, but I'm definitely going to peruse the rest of it.