Gloria's Got Soul, Peter's Tin Pan Sound, Plus Betty's Swingin', The Queen's Singin', And a Call Me By Your Name Secret Song! 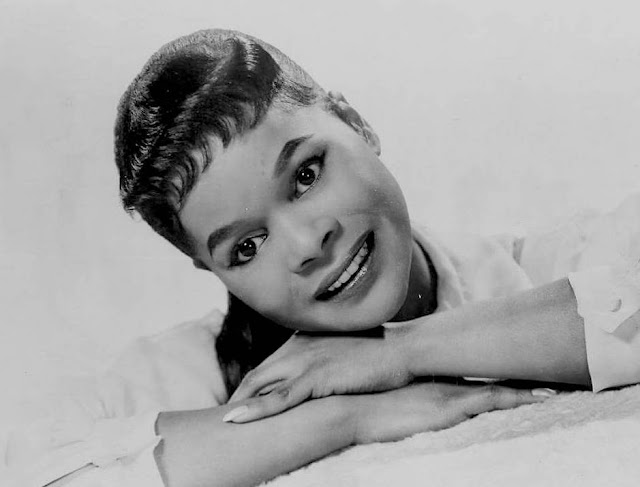 Who was Gloria Smyth? And whatever happened to her? And why didn't her photographer tell her not to look directly down at the lens? That'll make anyone look cross-eyed. So many questions!

In 1960, World Pacific Records, a swingin' West Coast jazz label, released "Like Soul!" It was the first and only solo LP for Gloria, and once you hear it - and, yes, it's a Get 'em Gloria Cheerful Exclusive! just for you - you'll wonder why she didn't cut more. Prior to this LP, she was a rising star on the jazz circuit, singing at celebrated venues like The Village Vanguard and Mister Kelly's. Then - poof! - she vanished.

I know you'll love this LP. From her opening take on "Running Wild," with her thrilling vocal slides and scoops, it's clear she was a talent to reckon with. Happily, when she wasn't touring... 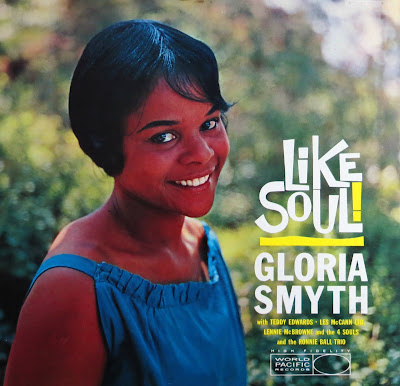 ...Gloria recorded with many stellar West Coast Jazz bands on their LPs, including hard-bop drummer Lenny McBrowne and his 4 Souls band. 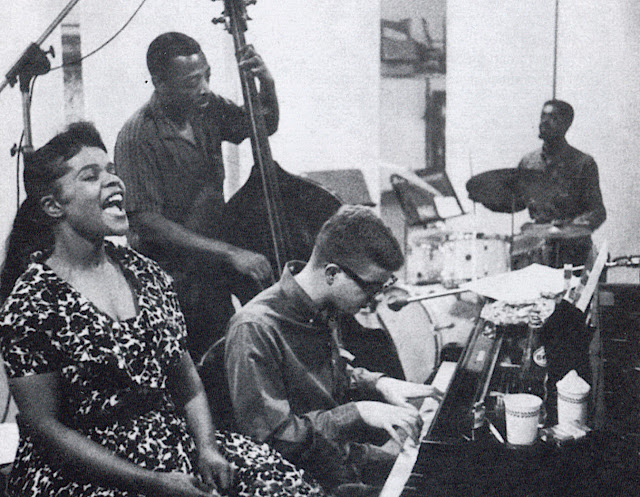 Lenny and the 4 Souls, hailed as "the future of West Coast jazz," released two LPs in the 1960s, and they're both included in the joyous "Complete Recordings." And, yes, Gloria is the vocalist on several prime tracks, like her moody take on "Sometimes I Feel Like A Motherless Child," a heart-wrenching masterpiece. 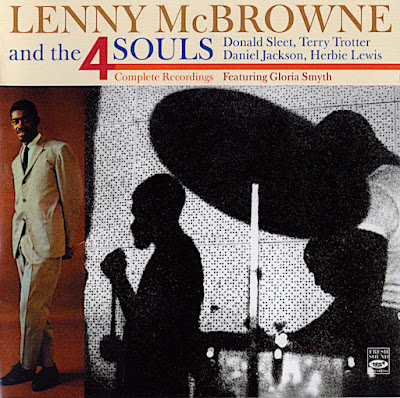 Meanwhile, Disney's been so busy feasting on the corpses of its vintage masterpieces - example, this train wreck - that it's sometimes hard to remember what the originals were like. Or that some of them, such as 1953's "Peter Pan," really weren't much good to begin with.

Come for me, Disney-stans, but beyond the "You Can Fly" sequence, the movie is dullsville; choppy, poorly-paced, a dirge of groan-worthy gags and near-toxic cuteness. Even The New York Times - at the time they were big Disney enthusiasts - could only manage a few backhanded compliments, like, "The most amusing sequence is a montage of bears scratching themselves done to a bolero rhythm." Ouch.

If anything rightly endures from the movie, it's the songs, with gorgeous music by Sammy Fain and lyrics by Sammy Cahn. No, really. You can hear the rousing Tin Pan Alley swing in every song by Fain, whose countless credits include the music for one of Doris Day's signature tunes, "Secret Love." There's also the comfort-food score by Oliver Wallace, whose credits stretch all the way back to "Snow White." In case you need to know, Disney is now planning a live-action remake of "Peter Pan." Because of course they are. 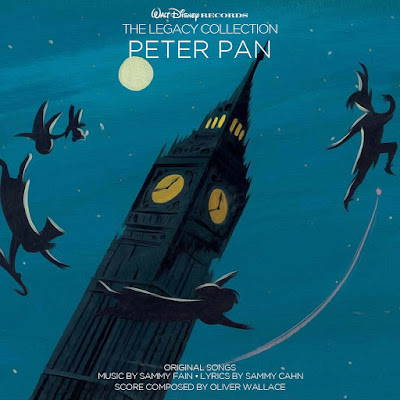 She's the only woman in the picture below, but you can't miss her. Yes, it's Betty Roche! 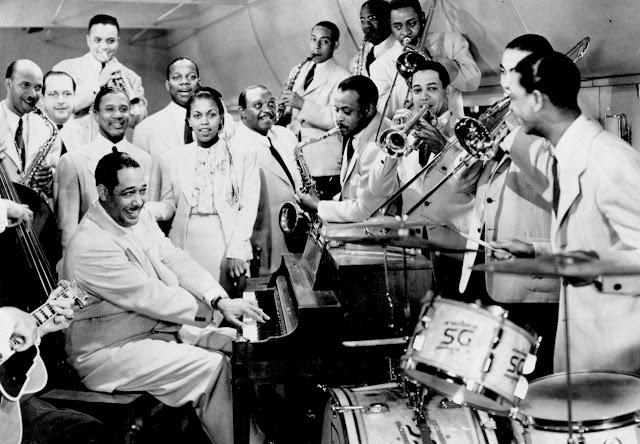 "Singin' & Swingin'" was the second of only three LPs cut by Betty in the late 1950s and early 60s. Her stirring blues and be-bop performances - along with her unusually clear diction, no matter how fast the rhythm - made her a much-in-demand vocalist for all the best bands and artists of the day, like Duke Ellington above, as well as Lester Young and Thelonious Monk.

Tragically, as you may already know from this blog, many of her live performances with the Duke, for instance, were never preserved on LPs due to music union rules and a strike at the time which forbade their recording. Luckily, we can still enjoy her warm, sophisticated takes on "Come Rain Or Come Shine," and "Blue Moon," to name just two great tracks on "Singin' & Swingin'" which remain as fresh as the day they were recorded. Want more Betty? Of course you do. 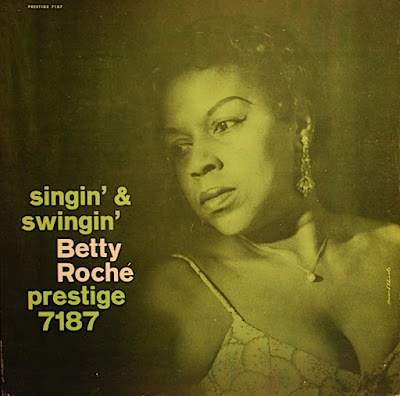 And now, kindly genuflect to "The Queen." 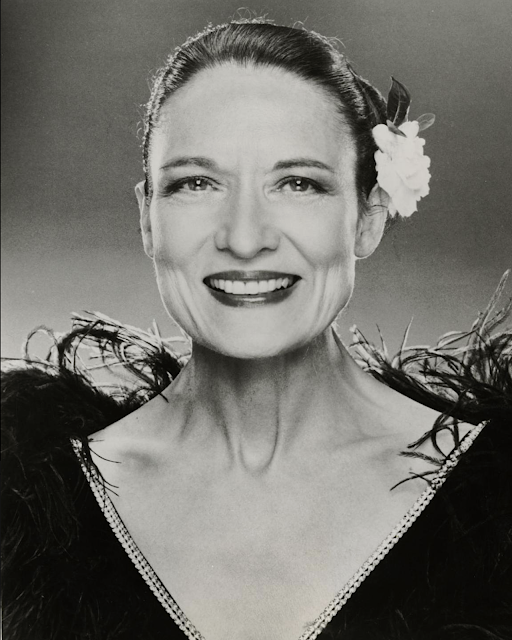 And I don't mean "queen" in a campy manner (though she has that in spades). Julie Wilson was hailed as "The Queen of the Cabaret" during her long and storied career - so do genuflect, and do it right now. Yes, she made her mark on Broadway, too, from the original production of "The Pajama Game" to the ill-fated Peter Allen musical "Legs Diamond" in the 1980s, but it was the cabaret where she really earned her renown.

At the St. Regis in 1957, she reigned with a feather boa, slinky gowns, glittery jewels and sophisticated, sometimes bawdy, wit. Then there's her voice, at turns vividly theatrical, slyly sassy, then unexpectedly subtle, and always compelling. She's the ultimate New York "Broadway Baby," as they say, and an absolute must. When she sings "Everybody Baby Needs a Da-Da Daddy," you'll be giggling and swooning - all at once. 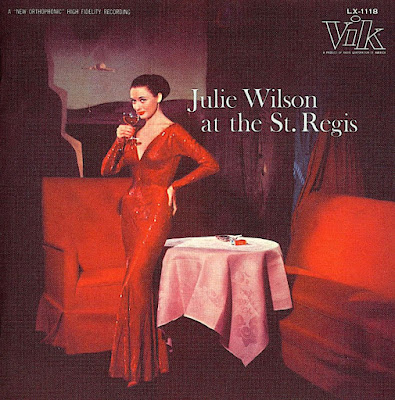 Peepers are always watching The Secret Song File through binoculars, through windows, or from high atop a building, just like the gun-toting fella below. Jeezy-peezy, can't she get some privacy? Dirty rotten peepers! What does this have to do with the sweet li'l EP she's listening to lately? Perhaps nothing, though it could if you twist things around a bit. 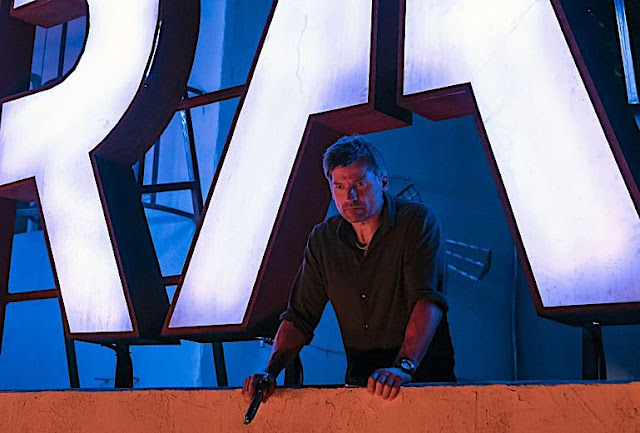 Like, think how a certain segment of the population had to kiss in the shadows to keep from prying eyes - peepers again! - and long before this American folk artist whisper-sang his way to greater fame after providing songs for a certain Oscar-nominated movie, which you know will be on heavy rotation during Pride month. And now he has a spanking new EP! So you see? Some things do make sense if you insist that they do.

Furthermore, I insist on another glazed cronut, because why not?

I'm serving coffee with them in the comments, so fire away, if you like.
Posted by The Cheerful Earfull! at Wednesday, June 05, 2019

Thanks for posting this eclectic collection, and also including the S.S. EP!

You're welcome, Tony. "Eclectic" is my middle name! ;)

Thanks for doing what you're doing.

Aw, thank you, Michael, I appreciate that.

Gloria Smyth changed her name later in life to Rasheema Pereira. She recorded an album titled "Stolen Moments" in 1992. https://www.amazon.com/STOLEN-MOMENTS-original-label-MUSIC/dp/B00NW7FQBG

Colonel, I'm very curious about this. Have you heard it? Is it any good?

Hi CE, Just a quickie to expand on your wonderful Gloria Smyth post. read on for the rest of Gloria's Biography.. Thanks for the album links. Regards Bob.